At our very essence, we are Light – all of us – you and I and everyone.

You are both a spiritual being of Light, and a biological being of light. We speak of beings of Light as though they are some sort of mystical beings, something better, more pure, but not us. This is one use of the phrase Beings of Light.

But at our very essence, we are LIGHT beings.

What is the Scientific Evidence that We Are Beings of Light?

Biophotons are ultraweak light emissions from biological systems. They can be detected by probes as part of the electromagnetic radiation of living biological cells. Biophotons are emitted in the visible and in the ultraviolet spectrum.

DNA uses ultraviolet photons (Light) to communicate. This has been shown by Fritz-Albert Popp, a German theoretical physicist, and also by a Russian scientist, Pjotr Garjajev. Communication between cells using biophotonic light has been proved in over 5000 experiments. Cells from the same culture have been placed in two environmentally shielded rooms, and if the cells are in quartz glass containers, one set of cells subjected to a deadly condition - virus, toxin, etc. will affect the second set of cells in another room. If the cells are in ordinary glass, or if a window between the rooms is ordinary glass, no communication occurs. Dr Gargajev suggested that communication by Light this is not just an occurrence between cells, but is also the means by which plants may communicate.

After thousands of experiments with cells, the scientists experimented with onion plants under similar conditions. Results showed that onion plant roots in one quartz glass pot could stimulate growth of a plant in a neighboring quartz glass pot. This was not the case with plants in ordinary silicon glass pots. Quartz allows light in the ultraviolet and infrared spectrum to pass through as well as visible light. Silicon glass filters out these bands of the electromagnetic spectrum. Apparently the plant's molecules send out an electromagnetic field in the ultraviolet range that allows them to communicate.

Cells talk to one another. Health and happiness are dependent on coherent Light in the body.

The following hypothesis is particularly interesting. Since plants use photosynthesis to grow, when we eat plants, we store the photons from the plants in our DNA for our bodily processes. DNA uses the stored light to send out a wide range of frequencies to switch on the processes like an orchestra conductor. Each cell has an electromagnetic field and resonance, allowing cells to use the light in their DNA "see" and 'hear" each other.

Cells communicate with each other within plants, animals and humans. They also communicate with other beings external to themselves in the same manner. Biophotonic communication occurs through field interactions and wave resonance. Field interactions and wave resonance both occur when beings are in proximity. Wave resonance occurs at a distance and does not depend on the physical proximity of two plants, animals or people. There is a symphony of biophotonic light and sound (photon and phonon wave frequencies) occurring each moment within us. This is the basis of telepathy.

Can We Photograph the Light?

The Light can be photographed using special equipment. The biophotons described above are regularly photographed by molecular biologist researchers, and appear as little dots of light moving in tubules.

A newer version of the Kirlian photography device, called a GDV – Gaseous Discharge Visualization – uses contact with a person’s fingertips to reconstruct the Light a person is emitting and show the “auric field” (emitted light) around their entire body, not just their fingertips. It does not show the fingertip light emissions, but a diagram of light emitted by the body, showing areas where it is strongest and weakest. The advantage is that you see the entire body’s emissions not the fingertips. The disadvantage is that you see a diagram, not an actual photo. A sample GDV diagram is shown below.

Your body does emit visible light (as well as ultraviolet) but 1000 times weaker than the levels that can be seen with the naked eye. The amount of Light emitted varies with the body clock, and is frequently at its lowest level around 10am and highest around 4pm. Of course this varies with each individual’s circadian rhythm.

On a molecular level, German researchers are taking photos of “biophotons”, low level electromagnetic Light travelling through your body. Since 1992, the International Institute of Biophysics, a network of research laboratories in more than 10 countries, based in Germany, has been coordinating research in biophotonics. It has been postulated that the light is stored in the DNA in the nucleus of cells, and released to regulate life processes. The light in the body forms a coherent holographic field. This field is often called an aura - but not by the biologists!.

Neurophysiologists such as Karl Pribram are taking note of the work with biophotonics and relating it to memory and consciousness. This is important new research at the frontiers of science.

From the research listed above, and from many other studies. We know now that there is scientific proof that we emit light, although it is too dim for most people to see.

Infrared light, far infrared light, magnetic and microcurrent therapies are being implemented that involve various frequencies and portions of the electromagnetic spectrum. Additionally, Ultraviolet light is being used in hospitals to sterilize and disinfect items from bacteria, viruses and mold. Since we are beings of Light, our bodies respond to light information in different frequency bands.

Many researchers in medical fields around the planet are currently exploring using Tesla-type technology to dissolve infectious diseases or even cancer, using Light frequencies.

NASA is using photobiomodulation - laser light -  to heal astronauts. Russia has done the same to heal cosmonauts. These instruments, originally used in the space programs,  have been adapted for general medical use by several companies. I have had Class IV  laser light therapy for several conditions with rapid results, as have my family members with Dr. Crespo, in Marietta, GA using  a Summus (K-Laser) device.

Several companies are making devices using Tesla coils that promote healing through pulsed energy, using frequencies of the electromagnetic spectrum. Many patients who have back surgery involving fusion are prescribed pulsed magnetic devices to speed the fusion. Several companies such as  Sedona Wellness have produced pulsed electromagnetic field therapy mats) such as the Sedona Pro) on a non prescription basis  using Tesla coils to generate frequencies to promote relaxation and reduce inflammation.

Other "Star Trek" type devices, handheld devices, were developed for the Russian space program and have now found widespread use throughout the world. The general term to describe them is "scenar", meaning "Self-controlled energo-neuro-adaptive-regulator". It's a microcurrent device with built in biofeedback that adapts its output as the body responds.  Devices such as DENAS (dynamic -electro -neuro -adaptive -stimulator) and other  scenar devices generate microcurrent electricity and deliver current through the skin to provide localized pain relief and reduce inflammation. In my personal experience, I have used the DENAS PCM-6 handheld device for local issues such as knee pain and SedonaProPEMF mat that generates pulsed electromagnetic fields for generalized health issues with excellent success. I've purchased from Coach Jimmy K, who provides lifetime support and training for his products.

Another form of light work is called radionics and it utilizes scalar energy to identify the energy signature of a disease in order to dissolve that disease. There are many types of radionics devices. It is an entire field, beyond the scope of our work here. Some researchers are using the technology to build health by identifying the energy signatures of nutrients and infusing that energy in specific individuals. One such researcher is Tom Paladino, who is currently using scalar energy, working to both dissolve infectious diseases and to infuse nutrients into individuals using scalar light so that their bodies can heal themselves. With training and intention, one can activate a personal Tesla Coil to improve health and well-being.

I should also mention the Light therapies done by people who are energy workers, and who transfer Light energy through their bodies by laying on of hands, or simply hovering their hands over an individual. Kirlian photography has shown that when such healing is taking place, golden light is emitted from the fingertips of the healer. Both the "healer" and the "healed" show increased energy after such transfers.

What about creatures of Light?

We are all familiar with fireflies that communicate on a summer’s night by flashing light. Marine biologists are finding more and more deep sea organisms that light up with a flash, shimmer or other pattern to attract prey or mates or to communicate or even to locate food. Corals and jellyfish are known to shine brightly, but now scientists have discovered that most deep sea fish do too. Over 90% of deep sea creatures exhibit either bioluminescense or biofluorescence. Bioluminescence is a chemical reaction, (such as the blink of the firefly) whereas biofluoresence is when an organism absorbs blue light and emits a different color such as red or green or orange. There are many scientific studies you might consult, but a great start is to watch the NOVA program “Creatures of Light”.

Are there Beings of Light without Physical Bodies?

There are beings of Light whose physical bodies we cannot see - but we can perceive as "Orbs". For the past 10 to 15 years, many people have photographed these orbs, and some people have seen them with the naked eye. They are large and small, different colors, and have been photographed by thousands of people. Many orb pictures are available on the web. I have taken a number of photos of orbs and will publish some on this site. The following were taken at the Atlanta Botanical Garden in December 2014. 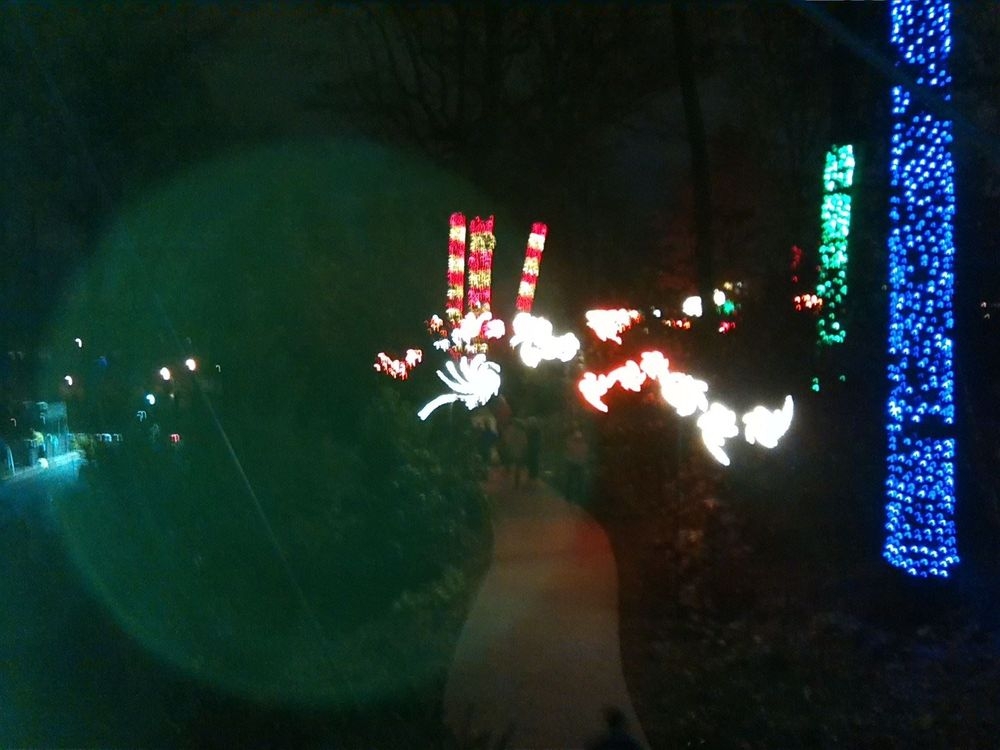 There is a great deal of discussion as to source of these intelligently moving orbs - spirits, ghosts, interdimensional beings, aliens - or perhaps some combination of these. No one knows. Some have hypothesized that the photos are nothing more than an artifact of digital photography, or dust specks, or refracted light through a lens. While a small percentage of these orb photos may be artifacts, clearly, not all of them are. Some people are known to be able to call the orbs to have their picture taken. They appear on command, day or night. Some appear to have figures inside of the orb. Dr. Klaus Heineman, a physicist who has worked extensively with NASA, has devoted himself recently to the study of orbs. He and Dr. Miceal Ledwith have investigated orbs under controlled conditions, and have produced several books on the subject. While there is considerably less research on orbs than on other aspects of

light, it is a fascinating new vista in light research...

Everything is vibration, energy  and frequency, aka Light.

My intention is two-fold:

1. To educate you about the Light, both the spiritual and physical basis for all existence.

2. To show you how to grow your Light so that you may add to the Light of the world. From time to time, there will be a variety of techniques described.

In any case, you know that NOW is the time for you to actualize the potentials you’ve felt. Your search has brought you here.

You ARE a being of Light. You sense this Light and perhaps sense the Oneness….Since all Light is connected, all Light is Eternal.

Orbs move among the lighted trees.

This orb seems to be following us.

We’ll explore all of this and more…Together, online, in lectures, workshops and private sessions.